Farmers are giving positive feedback on their early Numnuts experiences.

Exciting news has come in from the UK, where the trial phase of Numnuts’ first UK lamb marking assessment has just reached its conclusion. Meanwhile, demonstrations of Numnuts are taking place on Tesco sustainable farms, and Scottish hill farmers are about to commence a repeat try-out of Numnuts.

Being held at Scotland’s Rural College (SRUC), this trial was set up to demonstrate the pain-relieving benefits of 1 ml of Procaine administered through the Numnuts device during lamb marking.

108 lambs aged less than a week old were included in the trial. This age range complies with current UK legislation, which unlike Australia and New Zealand, requires lambs to be marked within just a few days of birth.

The groups were all videoed for two hours after treatment, with the footage later being scored for behavioural and facial signs of pain (read our article on the body language of lambs). 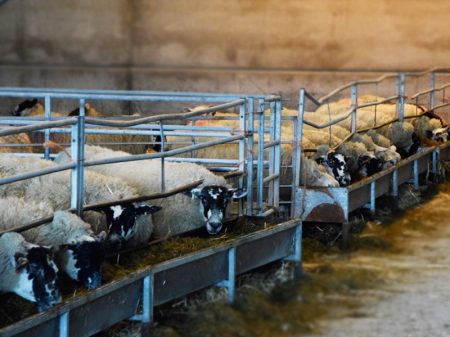 Procaine is a synthetic local anaesthetic that was invented in 1913. It is already approved for use in sheep as a pain mitigation agent for surgical procedures, with a minimum recommended dose of 2.5ml. In this Numnuts trial, just 1ml is being used per ring, meaning the device delivers the medication at a very safe level to young lambs.

The analysis of the data is now underway. Reflecting an optimistic mood in the Numnuts team, Ewan Macpherson, Director of Senesino Ltd, says, “We expect results mid-year, which will then lead to an application for a UK version of NumOcaine to be approved for use in the UK during 2023.”

Five commercial farms in the Tesco Sustainable Lamb Group have volunteered to use Numnuts on a demonstration basis in 2022.

Lamb marking started in late March and will continue until June on the farms in Yorkshire, East Sussex, Dorset and Hertfordshire, where lamb numbers range from 800 to 3,300.

These farms operate to the highest standards of animal welfare, so the Numnuts team are honoured that they will be using the device, again with 1ml of Procaine, for all their lamb marking this year.

“The UK market for lamb is huge and is heavily influenced by well-articulated consumer concerns over improved farm animal welfare,” says Ewan Macpherson.

“This is a major policy of all the major UK supermarket brands. Tesco is the biggest UK retailer, so we are hopeful that positive findings will lead to widespread uptake amongst this top farming group during 2023.”

In 2021, a dozen Scottish hill farms, all members of leading industry body Ruminant Health and Welfare, volunteered to try out the Numnuts device. Numnuts loaned the farmers the devices, with full support from their veterinarians, who prescribed the Procaine. After lamb marking, farmers then responded to a survey on their experiences. The farmers are now taking part in a repeat of this exercise, running from May to July 2022.

Ewan says, “Results are not yet available, but the fact that the farmers wish to repeat the experience indicates that their feelings were not wholly adverse!”

An Improving Outlook for Numnuts in the UK?

Overall, Ewan Macpherson is feeling optimistic about the future of Numnuts and its availability for farmers in the UK.

“Numnuts is making good progress towards its widespread availability for the UK market. Due to a different local anaesthetic being authorised for use in sheep in the UK compared with Australia and New Zealand, additional clinical trials are required.

“Now, 12 years into our quest, we are gradually, strand by strand, untangling the complicated red tape towards implementing improved welfare to the marking of lambs in the UK.”

Developed with funding from the AWI

Register My Interest and Become Eligible to Distribute NumOcaine